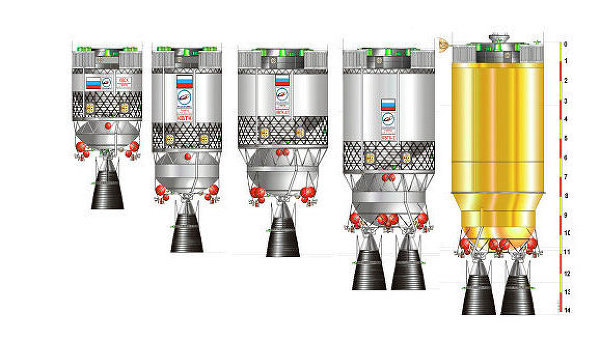 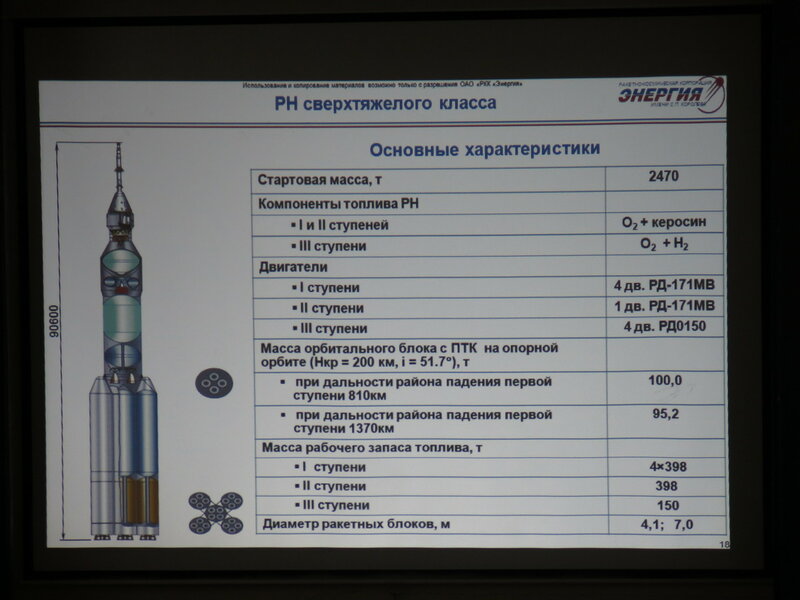 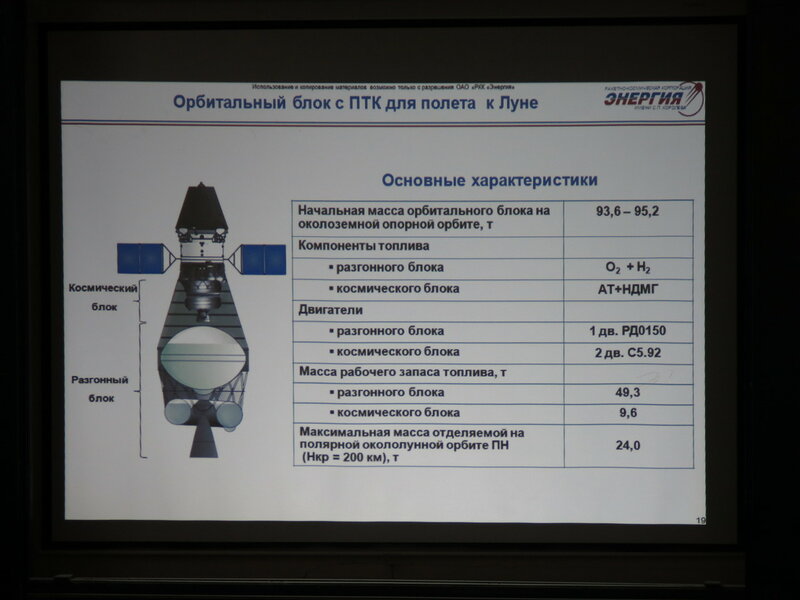 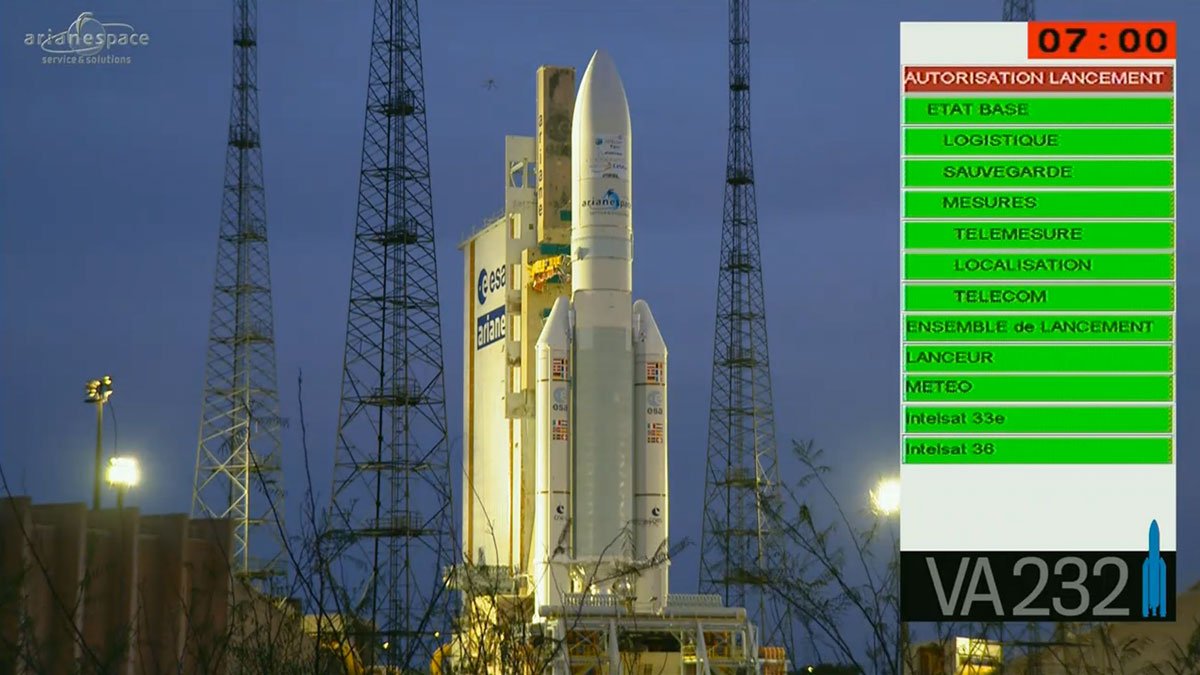 01:30 Plus+14 minutes. This upper stage engine is about 5 minutes into a planned 16-minute burn. Ariane 5 is at an altitude of 140 kilometers. A tracking station on Ascension Island in the Atlantic Ocean has picked up signals from the Ariane 5.

01:28 The Ariane 5 has passed over the horizon from Kourou and is now out of range of the Galliot tracking station near the launch pad.

01:25 Plus+9 minutes, 15 seconds. The main cryogenic stage's Vulcain engine has cut off and the spent stage has separated. It will fall back into the atmosphere into the Atlantic Ocean off the west coast of Africa. And the upper stage's HM7B engine is now firing to inject the Intelsat 33e and Intelsat 36 satellites into orbit.

01:23 Plus+8 minutes. Now in range of a communications station in Natal, Brazil, the launcher is about to shut down its first stage and ignite its cryogenic upper stage. Downrange distance is now about 1,200 km, altitude is 162 km and velocity is 5.61 km/s.

01:19 Plus+3 minutes, 30 seconds. Separation of the rocket's nose cone has been confirmed. The Ariane 5 core stage will continue burning until about Plus+9 minutes into the mission.

01:18 Plus+2 minutes, 30 seconds The solid rocket boosters have been jettisoned from the Ariane 5 rocket's core stage after consuming approximately 480 metric tons of propellant. The liquid-fueled Vulcain 2 main engine continues to fire to propel the vehicle and its satellite payload to space.

01:17 Plus+60 seconds The vehicle is on the proper heading as it rides the power of the twin solid rocket boosters and main stage liquid-fueled engine.

01:16 Liftoff! Liftoff of an Ariane 5 rocket on a dedicated dual-satellite delivery mission for Intelsat.

01:46 Plus+31 minutes. The Sylda dual-payload adapter has jettisoned, setting the stage for separation of Intelsat 36 at Plus+41 minutes, 50 seconds.

01:46 Separation of Intelsat 33e onfirmed, beginning a 15-year mission for Washington-based Intelsat. The satellite carries Ku-band and C-band payloads to provide television, broadband and mobile telecom services from Europe and Africa to the Asia-Pacific.

The Ariane 5's Sylda 5 dual payload adapter will be separated next, revealing the Intelsat 36 spacecraft for its deployment in a few minutes.

01:43 Plus+25 minutes, 20 seconds. The rocket's second stage shut down as scheduled. The upper stage is now maneuvering into the correct orientation for deployment of Intelsat 33e.

01:40 Plus+24 minutes. The rocket is surpassing a speed of 20,500 mph. Shutdown of the upper stage is about a minute-and-a-half from now. A tracking station in Malindi, Kenya, is now in contact with Ariane 5.

01:36 Plus+21 minutes. The upper stage will shut down at Plus+25 minutes, 13 seconds, after reaching a target orbit with a low point of 155 miles, a high point of 22,294 miles, and an inclination of 6 degrees. The rocket is now being tracked by a ground station in Libreville, Gabon.

01:35 Plus+20 minutes. Everything is going well with the burn of the upper stage HM7B engine as the Ariane 5 races across the Atlantic Ocean at 8.55 kilometers per second, or about 18,000 mph. 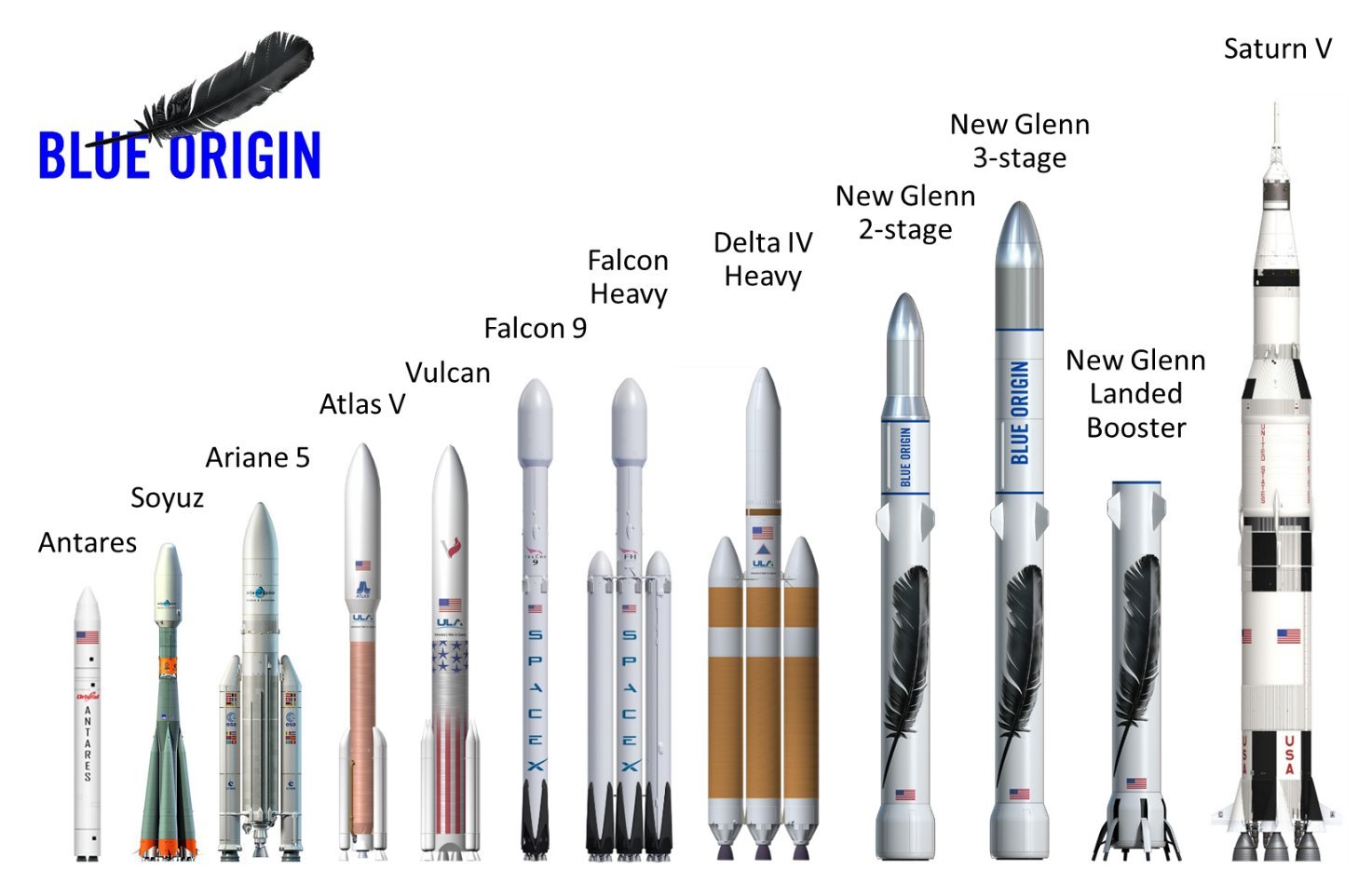