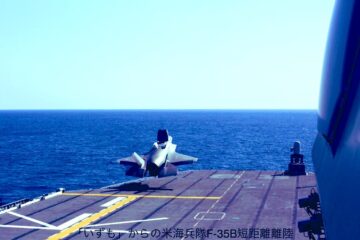 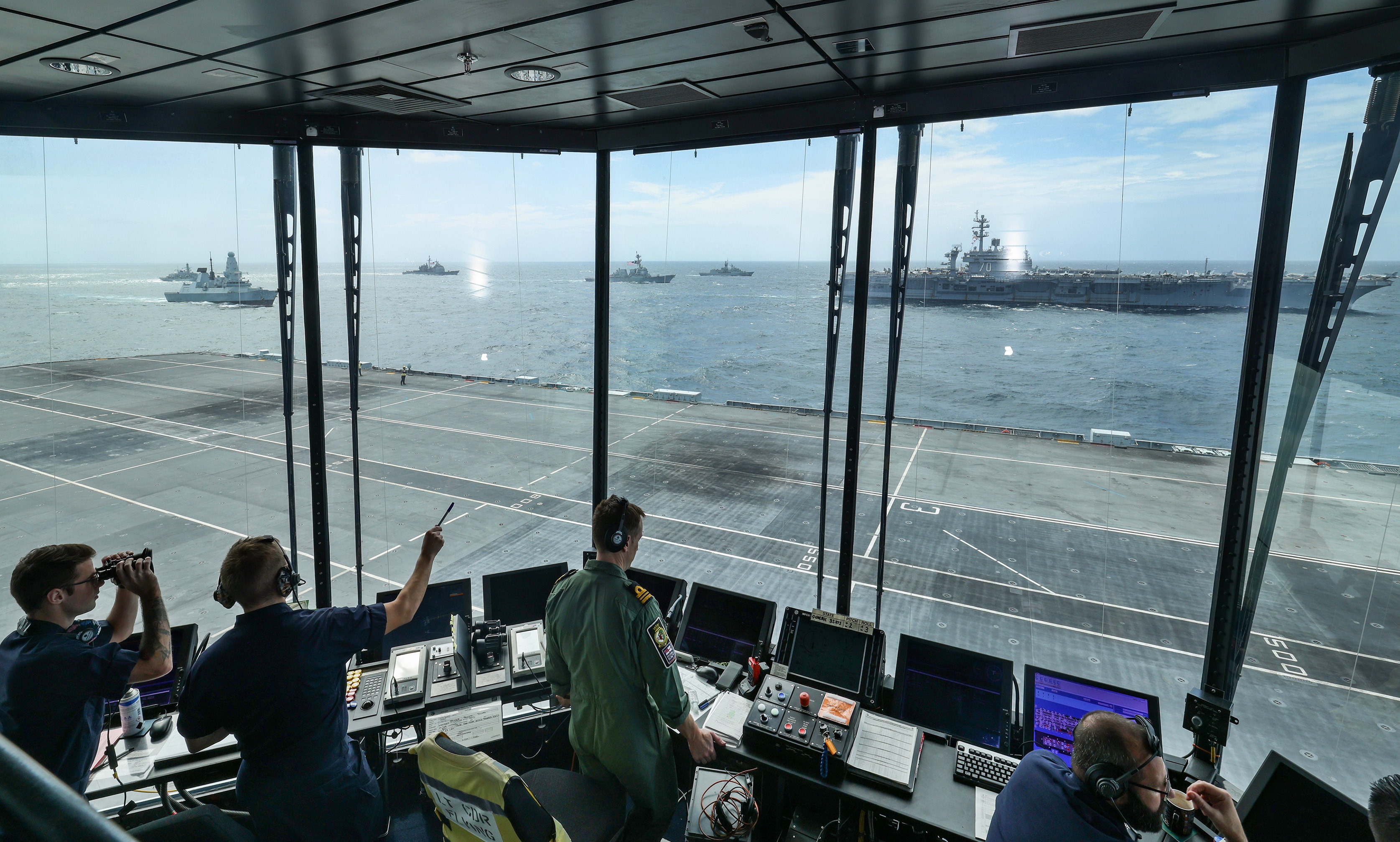 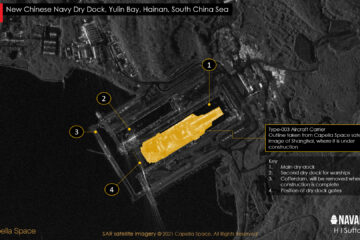 News
China’s Massive New Aircraft Carrier Is As Big As It Can Be
27 Oct 2021
The growth of the Chinese Navy has been incredible. The PLAN (People’s Liberation Army Navy) ...
Read More

The new carrier as EMALS (electro-magnetic aircraft launch system), like catapults. This is the same technology tat the U.S. Navy is introducing with the Ford Class. It means that the KJ-600 can be operated. And it should improve the endurance of carrier borne fighters. In particular, a new stealthier carrier fighter is expected. 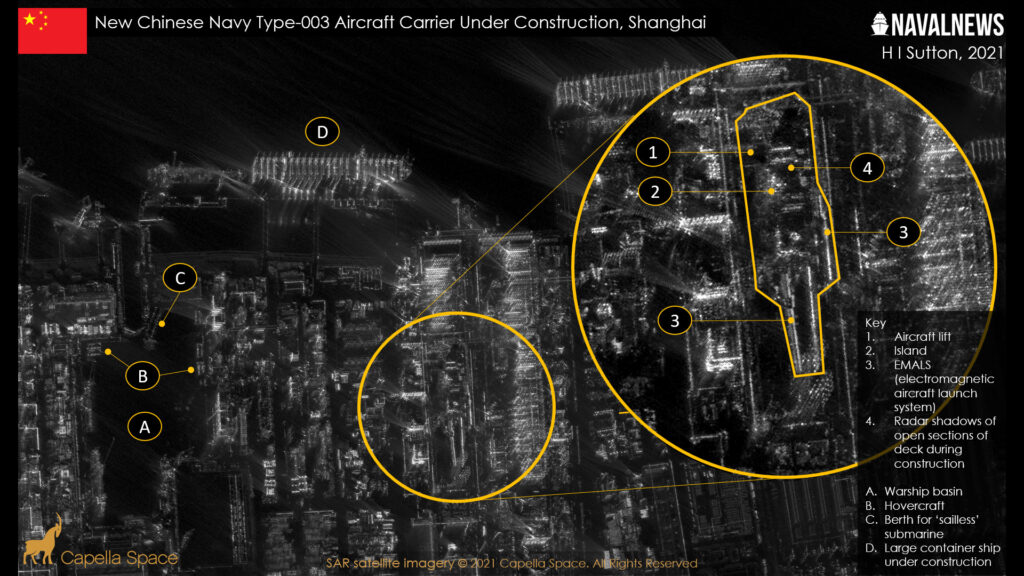 The Type-003 aircraft carrier is visible in this recent radar satellite (SAR) image from Capella Space.
Progress appears steady at the Shanghai yard. Another ship which was recently in the same dry dock, but nearer the river, has been moved. This was blocking the entrance of the dry dock so is a necessary step before the carrier is launched.

We do not believe that launch of the carrier is imminent however. This is because sections of a container ship have been moved into the dock behind the carrier. Two massive holes providing access to the inner workings. This is normal for aircraft carrier construction and the same can be seen on U.S. ships.

Analysis of the imagery also reveals insights on other warship programs. A number of the large hovercraft intended for amphibious ships are still present in the basin, along with other naval vessels.
Of particular interest however, the unique ‘Sailless’ submarine does not appear to be present. Analysts will be watching this submarine closely for signs of it entering operational service, or being moved to a research unit.

Size Matters
1,900 km (1,200 miles) further south, at Sanya on Hainan, work is continuing on a gigantic dry dock for the carriers. The facility is strategically located for access to the South China Sea. One carrier, the Type-002 Shandong, is already based there, together with most of China’s nuclear submarine fleet.

A large cofferdam was built in 2016-17 to keep the sea out while construction took place. The docks are now clearly visible in the SAR imagery. Measurements confirm that the new Type-003 aircraft carrier will be able to fit it. However it’s tight beam suggests that China does not have plans for substantially larger carriers. 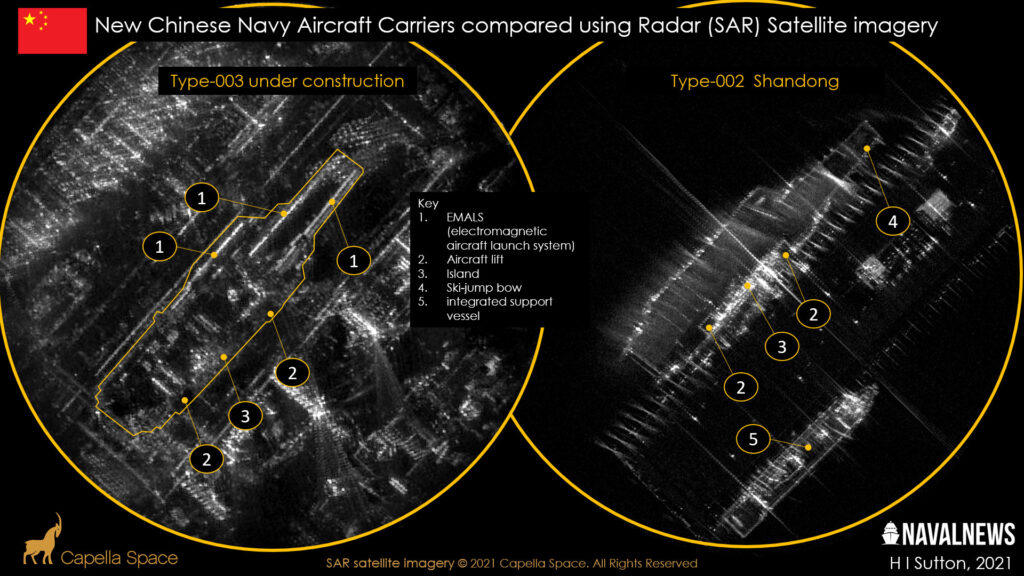 The Type-003 carrier (left) is wider and loner tan the first two carriers, such as the Type-002 (left). Catapults replace the ski-jump allowing more types of aircraft to be operated.
Importantly, the largest new dock is only about 80 meters (268 feet) wide, which is the same as the docket where the Type-003 is being built. The Type-003 itself is also approximately 80m wide (our earlier estimates were slightly narrow as it turned out). This suggests that a) the Type-003 will fit inside the new dock, b) any new carrier cannot be any wider if it too is to fit.

Therefore it seems likely that the Type-003 represents the ‘full size’ Chinese aircraft carrier for the foreseeable future. The next ones may be longer, or greater displacement, but not wider. If they are, yet more infrastructure may need to be built.

The new aircraft carriers represent a significant increase in capabilities for the Chinese Navy. And also part of their emergence as a true blue-water force.
Нажмите для раскрытия... 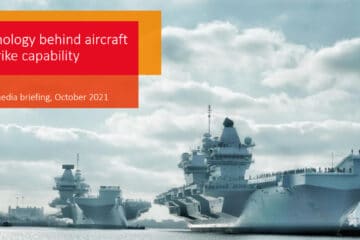 On October 12, 2021, BAE Systems held a press conference for the Japanese media, where they announced the establishment of a local corporation in Japan.
Read More

Thomas Reich, Vice President and General Manager of BAE International Japan, explained that there were two reasons for the establishment of the Japanese corporation.
One is that defense cooperation between Japan and the UK has recently been greatly strengthened. In accordance with the policy of multilateral security cooperation promoted by former Prime Minister Shinzo Abe, the Japanese government has strengthened cooperation with countries in addition to the United States. One such country is the United Kingdom, and recent developments include the port call of Britain’s newest aircraft carrier, the Queen Elizabeth, to the Yokosuka Naval Base in September 2021, followed by a telephone conference between the Foreign Ministers of Japan and the United Kingdom.
In addition, the UK’s “Global Britain” following its exit from the EU, and the strengthening of the UK’s commitment to the Indo-Pacific region based on this, is also encouraging this trend. And since BAE, as the largest defense company based in the UK, supports these UK government policies, they are both aiming to strengthen their cooperative relationship with Japan.
Another reason is the view towards Japan held by BAE. Currently, BAE is positioning Japan as a strategic global market, along with India. And the direction that Japan is currently taking to strengthen its defense capabilities in terms of space, cyber, electronic warfare, and AI technology is a good match for BAE’s capabilities. Therefore, they have decided that now is the best time to strengthen cooperation with Japan.
This local corporation does not seem to be planning to manufacture any equipment for the time being, but will be in charge of all the products that BAE handles, and will not only export them, but will also cooperate with Japanese companies through licensed production and joint ventures. They are also interested in developing new technologies.
Нажмите для раскрытия...

On October 12, 2021, BAE Systems held a press conference for the Japanese media, where they announced the establishment of a local corporation in Japan.
Read More