Russian Navy Commander Stole Two 13-Ton Bronze Propellers From His Own Destroyer
The heist involved substituting the real screws for two fake ones made out of less expensive metal.

The Russian Navy says that a former commander of the now-decommissioned Sovremenny class destroyer Bespokoynyy conspired with others and stole the ship's two bronze propellers while it was in dry dock being converted into a floating museum. The alleged caper sounds like it was ripped straight from the plot of a comedic Hollywood heist movie, with the thieves reportedly swapping out the pair of screws, each weighing approximately 13 tons, for ones made out of a cheaper metal.
Russian media outlet Interfax reported on Jan. 11, 2021, that Sergei Sharshavykh, head of the military investigation department of the Russian Navy's Baltic Fleet, confirmed that the investigation into the theft was nearly complete. The names of the former commander of the Bespokoynyy, or any of their accomplices, and what kind of jail time or fines they might be facing, were not disclosed. The two propellers are valued at approximately 39 million rubles, or just over $522,513 at the rate of exchange at the time of writing. 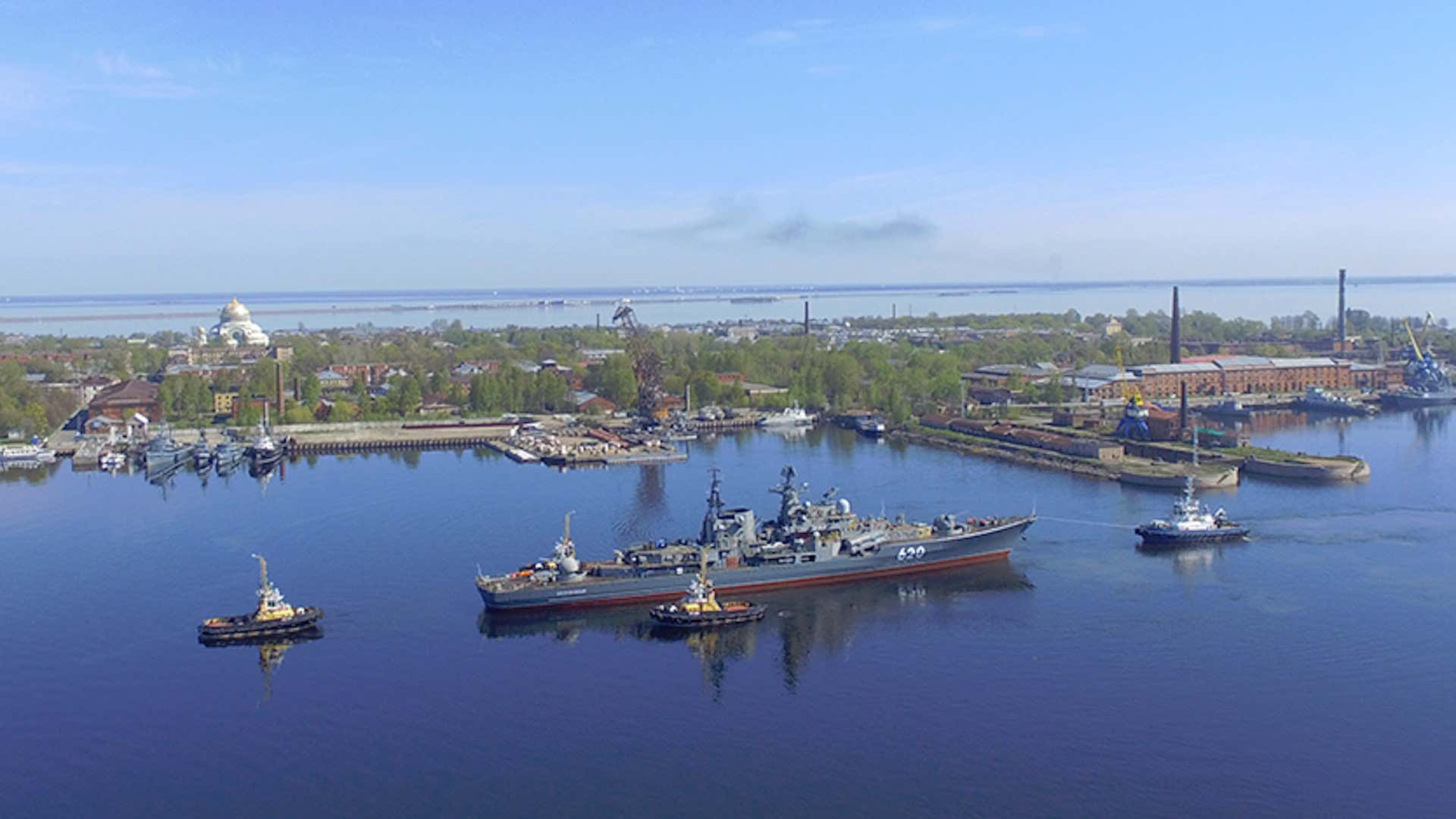 RUSSIAN MINISTRY OF DEFENSE
The decommissioned Sovremenny class destroyer Bespokoynyy under tow in 2018.

Sharshavykh, the Russian Navy investigator told Interfax that, to "cover their tracks," those involved in the theft had imitation screws made up, the "cost and quality of which are several times lower" than the original bronze ones.


The heist took place at the Yantar Shipyard in Russia's Kaliningrad enclave, which is geographically separated from the rest of the country and is situated between Poland and Lithuania on the Baltic Sea. Kaliningrad, which is heavily militarized as a whole, is also home to the headquarters of the Baltic Fleet.
It's unclear when the theft took place, but Sharshavykh said that happened after Bespokoynyy arrived at Yantar in 2016 for conversion into a museum ship as part of its decommissioning from the Russian Navy. That process included remove the destroyer's two propellers, as well as its driveshafts, and sealing the hull in such a way as to allow it to remain afloat, but without the need for regular maintenance.
The destroyer was finally formally decommissioned in 2018 and is now on display at the Patriot Park in Kronstadt, on Kotlin Island, near St. Petersburg.
A total of 21 examples of the Sovremenny class, also known as Project 956 Sarych class, were built, the first of which was delivered to the Soviet Navy in 1980. Construction of these ships, including four that ultimately went to the Chinese People's Liberation Army Navy (PLAN), continued in Russia after the fall of the Soviet Union. Bespokoynyy was only commissioned on Dec. 28, 1991, two days after the Supreme Soviet formally voted to dissolve the Union of Soviet Social Republics. 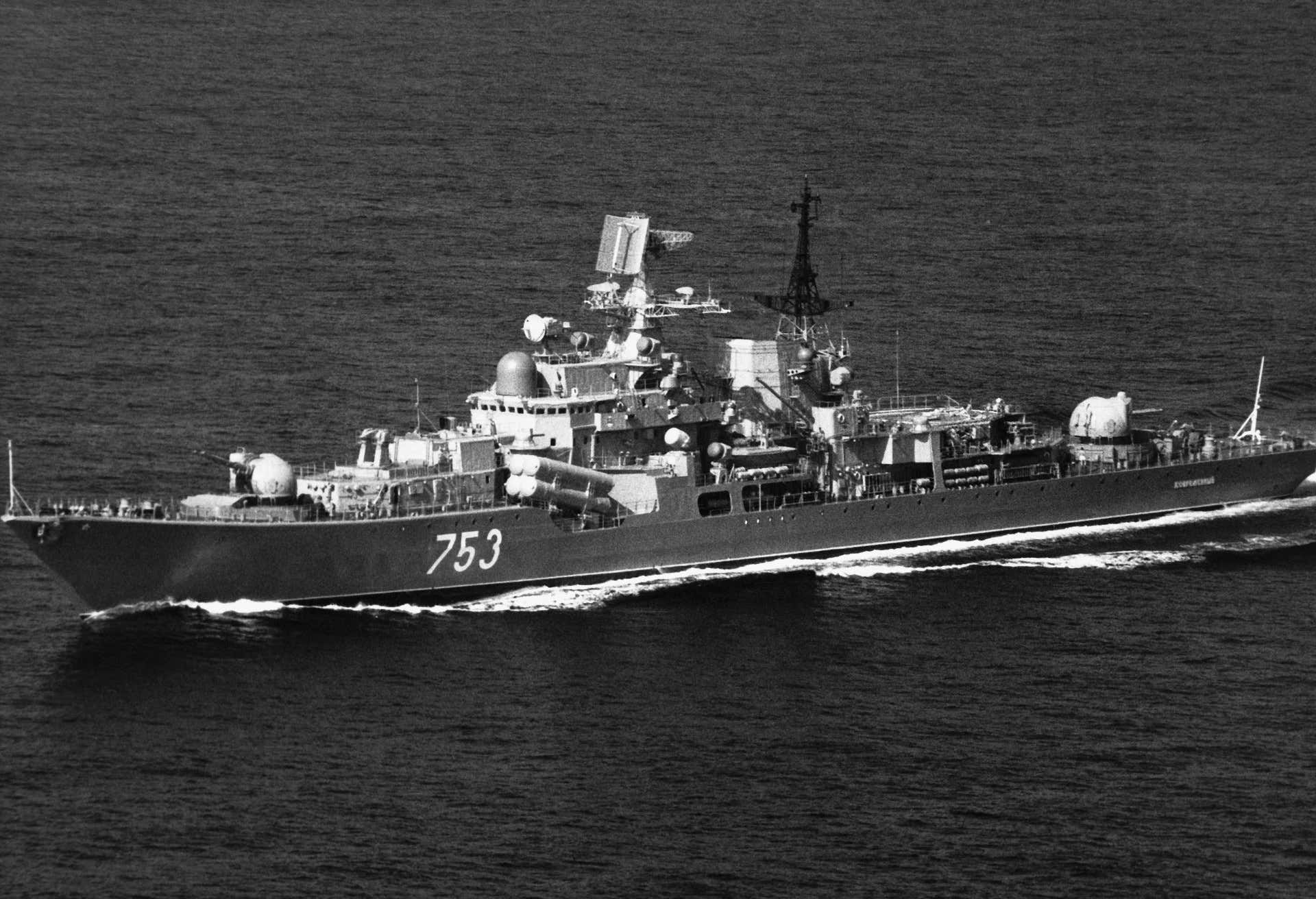 USN
The Sovremennyy photographed underway in 1982.
These destroyers displace around 6,600 tons with a basic load, but that can grow to nearly 8,500 tons with a full combat load. The primary armament of the ships were eight P-270 Moskit supersonic anti-ship missiles, also known as the SS-N-22 Sunburn to NATO. They could also carry up to 48 3S90 Uragan surface-to-air missiles, the navalized version of the 9K37 Buk, also referred to by NATO as the SA-N-7 Gadfly. The ships had two twin 130mm gun mounts, as well as torpedo tubes, which were also capable of firing anti-submarine missiles, and AK-630 close-in weapon systems. At the time of the first ship's introduction, the Sovremenny class also had some of the most advanced radars, communication systems, and electronic warfare systems anywhere in the Soviet fleet.
The initial Project 956 design was followed by a slightly improved Project 956A variant, which was most readily distinguished by the addition of longer missile tubes to accommodate improved versions of the P-270 missile. The PLAN examples were of further upgraded types known as the Type 956E and 956EM, which have subsequently been refitted further to replace many of the Soviet-era weapons and other systems with more modern Chinese types, including the YJ-12 supersonic anti-ship missile and the HQ-16 surface-to-air missile. 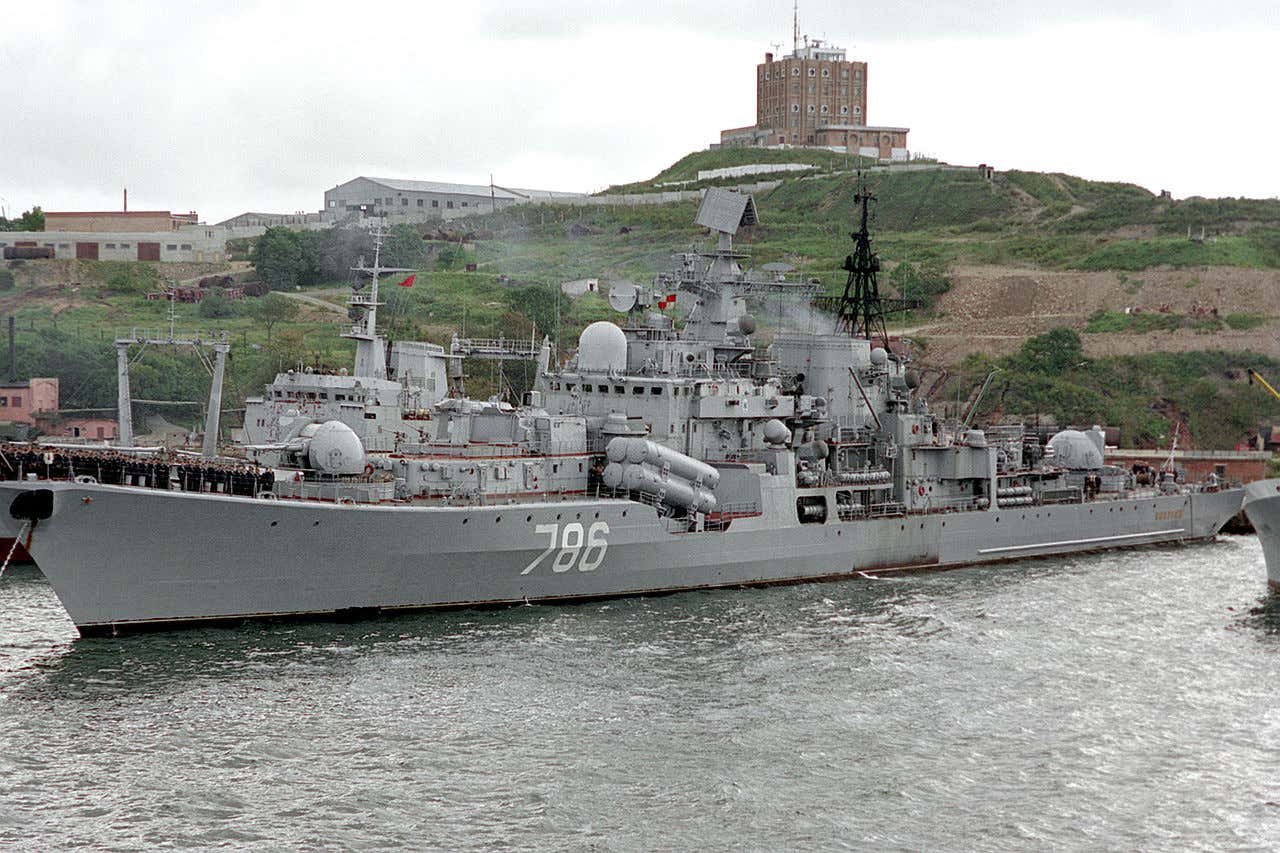 USN
The Russian Navy's Sovremenny class destroyer Bystryy.
As to the case of the Bespokoynyy, the revelation that its screws had been stolen comes just over a month after reports emerged that thieves had taken unspecified "radio equipment" out of one of the Russian Air Force's highly sensitive Il-80 Maxdome “doomsday aircraft,” an airborne command post for use during major crises, including a nuclear conflict. You can read more about that incident and its implications in this past War Zone piece.
Though the weight of the propellers, which must be quite large, might make it seem hard to believe that even a group of knowledgable criminals were able to steal them without someone noticing, it's hardly the first time enterprising Russian thieves have carried out such a brazen heist. In 2008, there was a report that an entire 200-ton metal bridge had been dismantled and stolen to be sold for scrap. In 2016, in a case of literal highway robbery, a municipal Russian official oversaw the removal of some 7,000 reinforced concrete slabs from 31 miles of road, again for resale on the black market.
When it comes to Bespokoynyy's propellers, it seems much more likely than not that other Russian Navy and shipyard officials were also involved in the heist. It's not clear if the bronze screws, or what's left of them, if they haven't already been sold for scrap, have been recovered.
Thankfully, unlike the theft of equipment from the Il-80, this destroyer was already headed into retirement when this theft took place. It's still an ignoble footnote, though one that seems ripe for a comedy heist flick, for this warship, which had served the Soviet and Russian Navies for more than 25 years.
All told, it is safe to say that someone got screwed.
Нажмите для раскрытия...