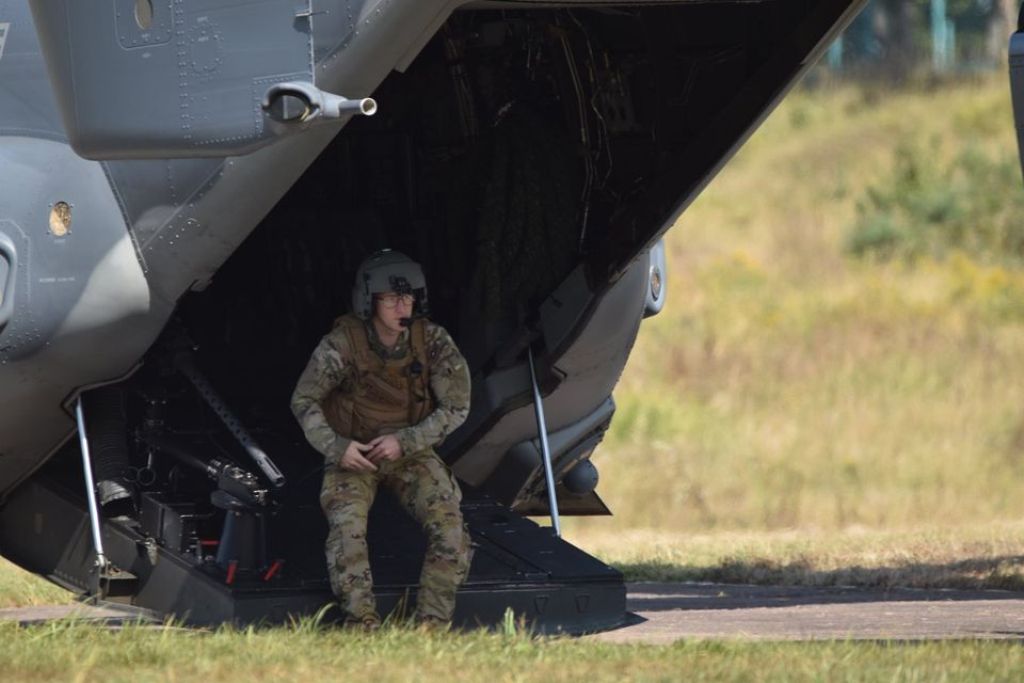 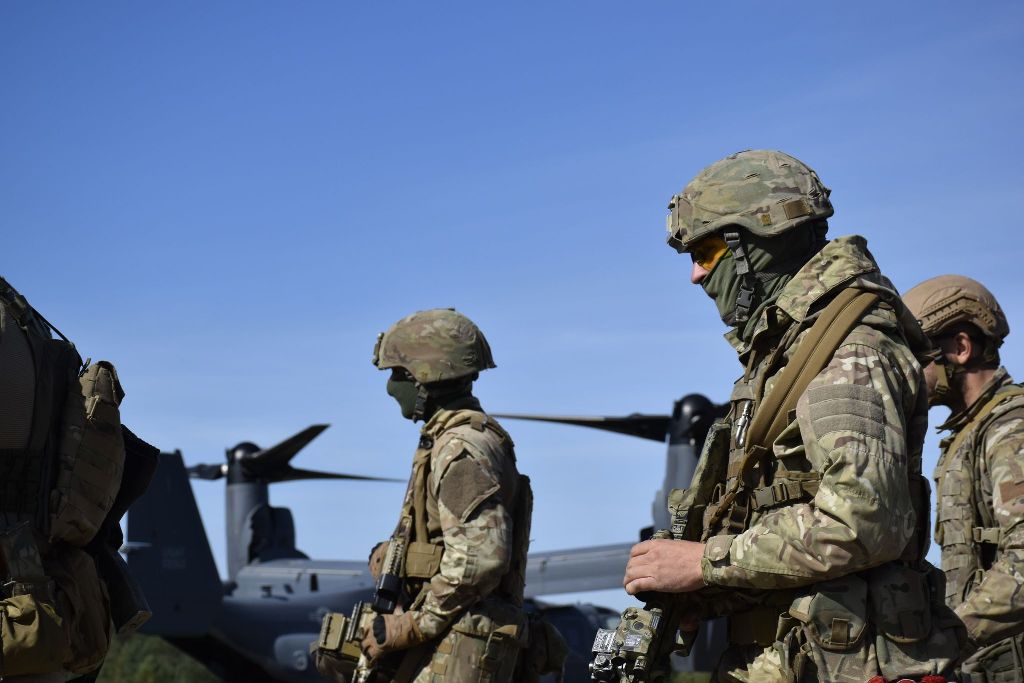 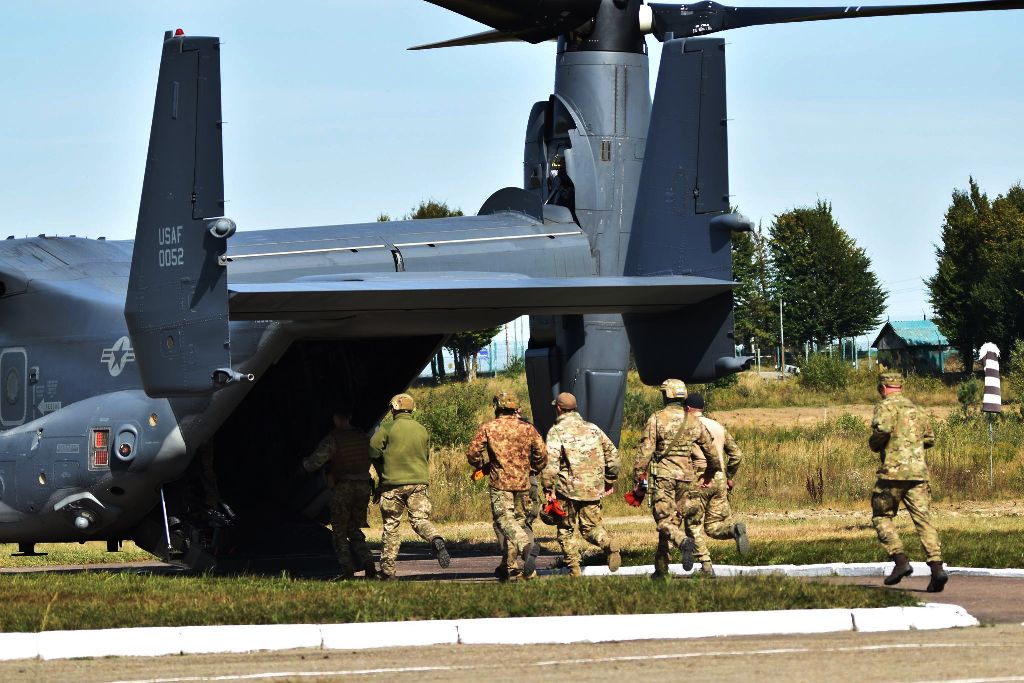 
More than 450 crack British troops have parachuted in to Ukraine in a show of strength as tensions rise between the embattled country and Russia.
The drop is the biggest mass UK exercise in more than 20 years.

The Mirror was the only British newspaper allowed to witness the para-drop, named Joint Endeavour.

Elite Pathfinder soldiers had earlier parachuted in to scope a landing zone for the main assault force.
Troops laden with up to 80lb of combat kit were dropped from C-130 warplanes flying at 600ft after leaving RAF Brize Norton in Oxfordshire.

A member of the Pathfinders exits the back of a Hercules C130 aircraft to parachute into Ukraine (Image: Cpl Danny Houghton RLC)RELATED ARTICLES
Soon after landing, Sgt John Jenkins, 33, of 7 Para RHA, told us: “We’re carrying a huge amount of weight and in the air for about 30 seconds maximum.
"I have done around 15 jumps but this one stands out.
"Flying kitted up all the way from Oxfordshire across Europe there has been massive excitement about it.

A member of the Pathfinders exits the back of a Hercules C130 aircraft (Image: Cpl Danny Houghton RLC)
“We’re the lead element and at high readiness so this was a chance to put the training into practice and it went extremely well.
“When you stand up to get out of the plane you just want to get going.
"There is an initial surge, a maelstrom as you’re thrown about in the air.

On the ground at a rendezvous point (Image: Andy Stenning/Daily Mirror)
“You check your parachute and then it goes quiet.
"The next thing you’re thinking about is the landing.

"It was hard but we were all OK.”
More than 13,000 have been killed in the Russia-Ukraine conflict which was triggered by Moscow’s invasion of Crimea in 2014.

Pathfinders drop in before the main group to secure the landing area (Image: Andy Stenning/Daily Mirror)
The conflict has worsened in recent months.
Moscow-backed separatists have launched large-scale attacks across East Ukraine as part of Putin’s bid to regain Soviet-era territories for his Russian Federation.
Ukraine’s airborne forces commander Lt Gen Ievhen Moysiuk praised Britain for standing shoulder to shoulder with his country in the face of the growing aggression.

After landing, paras making their way to rendezvous points while Ukranian troops make their drop behind them (Image: Andy Stenning/Daily Mirror)
He said: “This exercise cements our links to our British friends and reassures the local population.
“Russian activity is on the increase along the border and the message from us is certainly that Ukraine will defend itself against any threat.
“I am very grateful to our British airborne comrades for joining this exercise.

The joint exercise follows rising tensions with Russia (Image: Andy Stenning/Daily Mirror)
"It has gone extremely well and shows how good our joint co-operation is.”
The most senior British officer on the ground added: “We are willing and ready to deploy.
“What we are saying by being here is that we are standing by our allies and partners and the sovereignty and security of the Black Sea region.”

Ukranian officer Lt Gen Ievhen Moysiuk (Image: Andy Stenning/Daily Mirror)
The exercise, practice for a live operation, was aimed at getting the largest number of troops on the ground in the shortest time possible.
The Pathfinder unit is one of the most secretive in the British Army – and the Mirror was given a rare glimpse into the lives of members.
Troops are normally parachuted into the landing zone, often behind enemy lines, under darkness to pave the way for the main force.

16th Air Assault Brigade Paratroops drop in the field a short drive to the border with Russia (Image: Andy Stenning/Daily Mirror)
The major on this operation, known as “Jim”, said: “We are trained to go in at risk to reduce and mitigate risk to the main force coming later.
“We have to enable the main force to have a good landing and be safe before they move forward and that does entail a certain amount of risk.
“It is an enormous relief to see the main force come down safely having spent time on the ground guiding them in, out of sight of the enemy.”