By Branko Bogdanovic
www.smallarmsreview.com
A 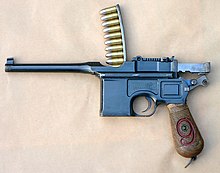 Mauser "Red 9" C96 with stripper clip
During World War I, the Imperial German Army contracted with Mauser for 150,000 C96 pistols chambered in 9mm Parabellum to offset the slow production of the standard-issue Luger P08 pistol. This variant of the C96 was named the "red 9" after a large number 9 burned and painted in red into the grip panels[20] to warn the pistols' users not to incorrectly load them with 7.63 mm ammunition. Of the 150,000 pistols commissioned, approximately 137,000 were delivered before the war ended.[9] Because the army delegated the branding to unit armourers, not all 9 mm pistols carry the nine. Original 9mm pistols can be told from 7.63mm-to-9mm conversions because they have 9mm-rated sights (marked 50m-500m) rather than 7.63mm-rated sights (marked 50m-800m).
Нажмите для раскрытия...