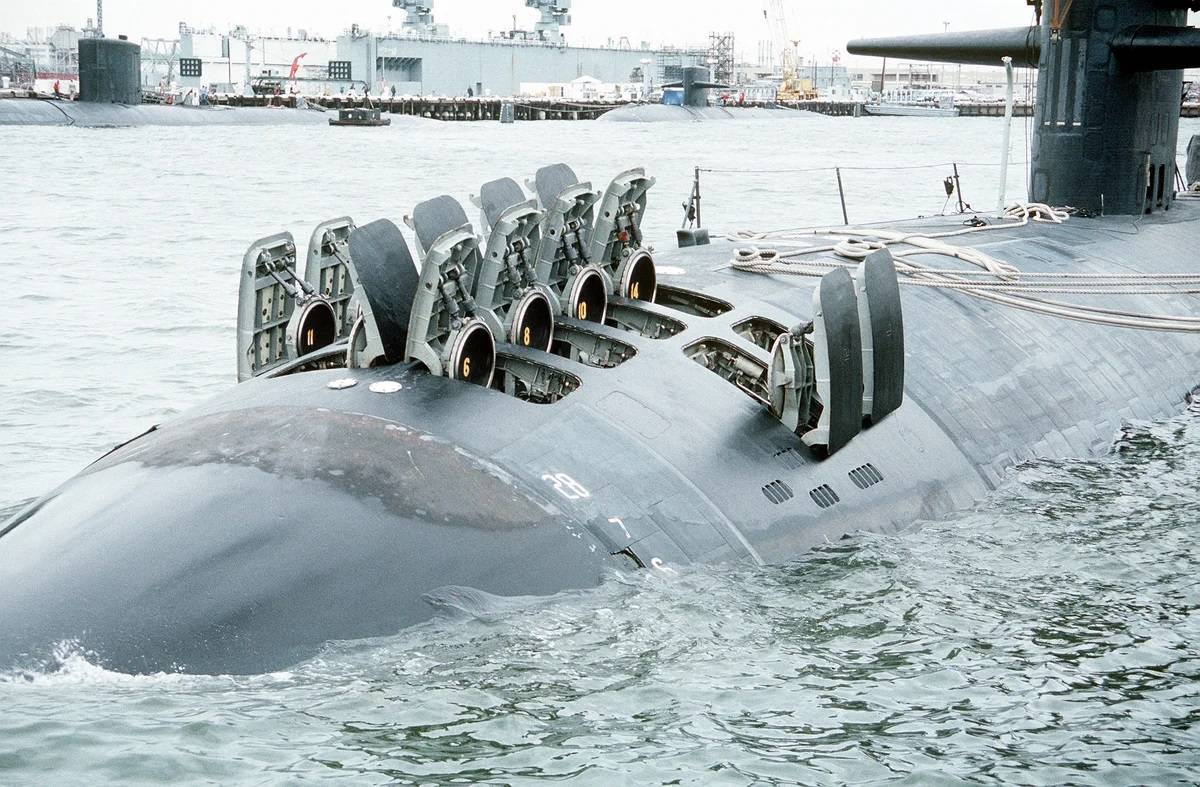 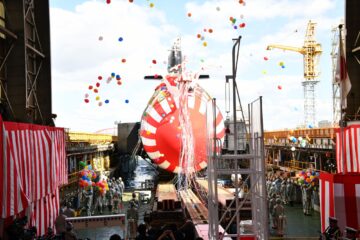 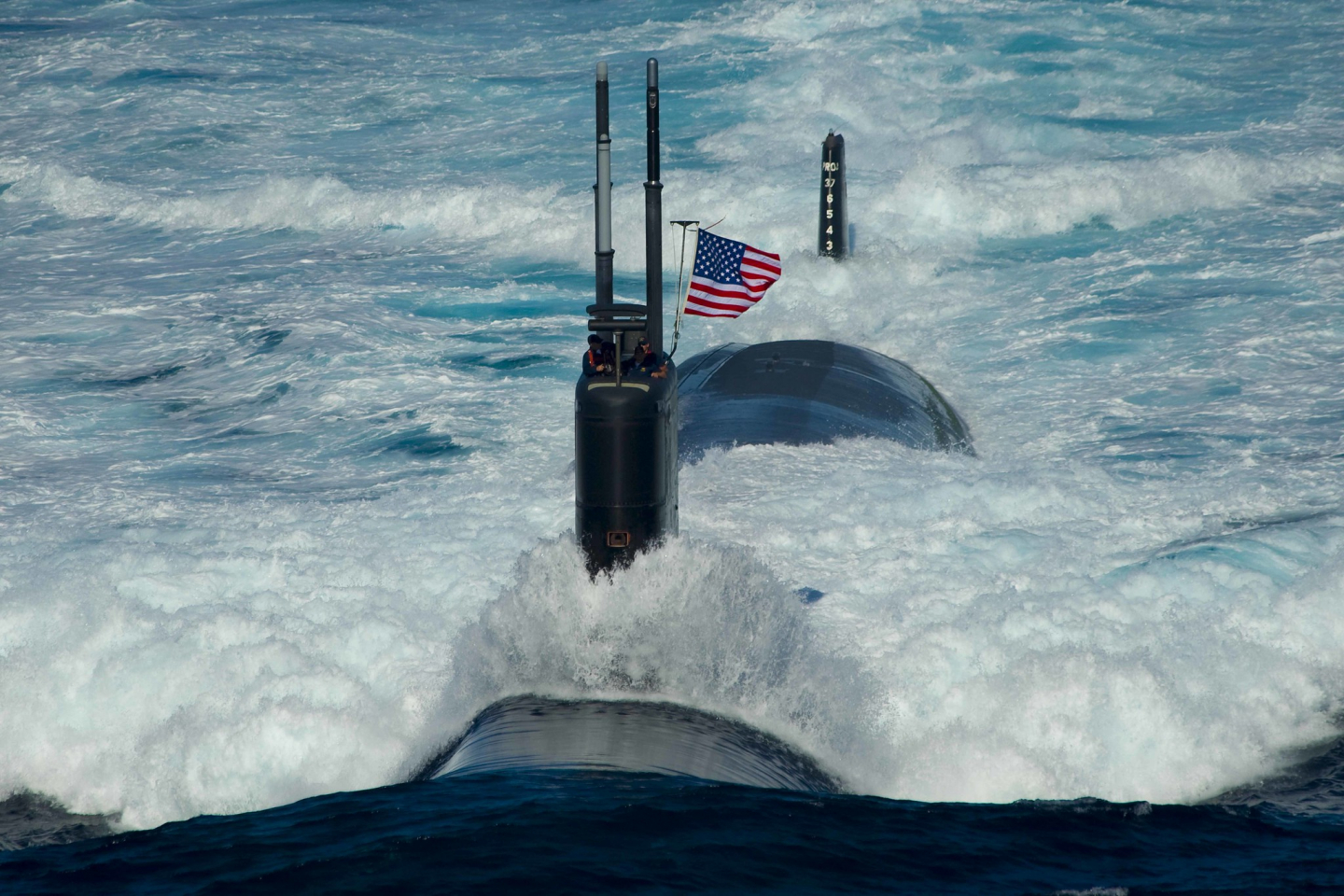 Australia’s Nuclear-Powered Submarines Should Be Built in America

The first of anything is expensive. Theodore Wright studied this in the 1930s and found a mathematical relationship between how many of a thing have been made and how much cheaper and faster productio 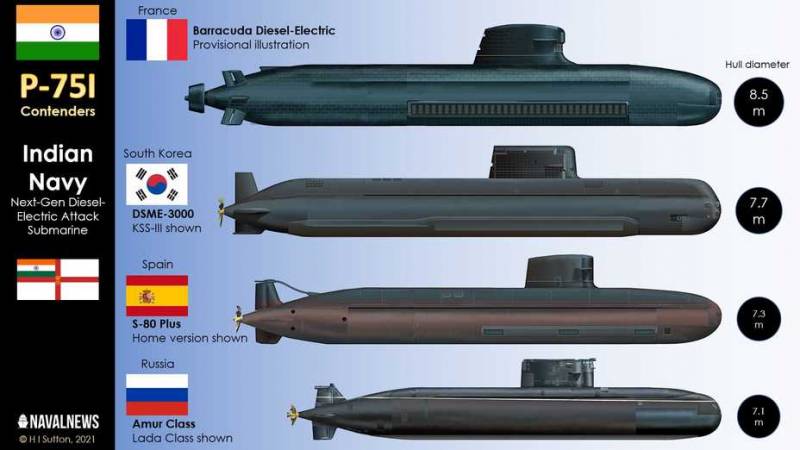 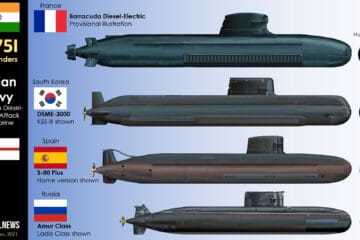 News
The 4 Submarines Competing For The Indian Navy’s P-75I Program
14 Oct 2021
There are four contenders for the Indian navy’s next-generation P75I submarine. They are currently submitting ...
Read More 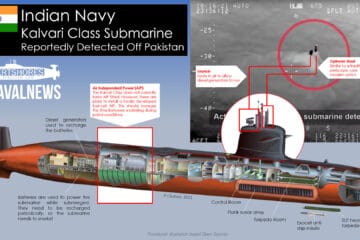 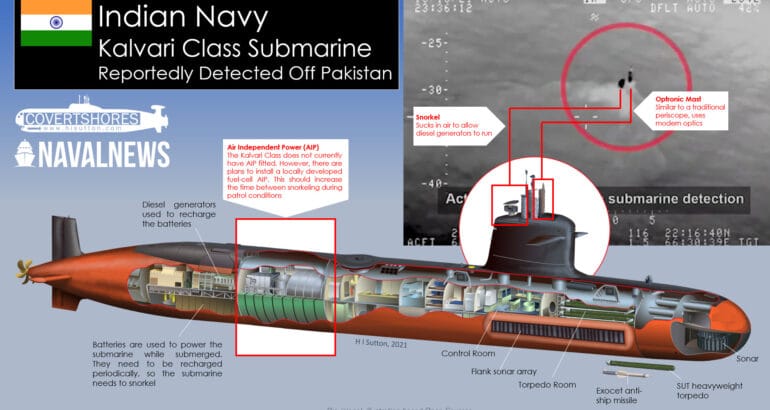 Click to Enlarge. The video footage released by the Pakistan Navy matches the Indian Navy's Kalvari Class submarine. These are not currently fitted with AIP (air independent power) which reduces the frequency of snorkeling.

News
World’s Newest Class of Nuclear Attack Submarine: Rare Access Inside Suffren
21 Oct 2021
Leading Navies are secretive about the full capabilities of their submarines. In a rare privilege, Naval News has been allowed aboard the French Navy's (Marine Nationale) newest boat, Suffren. Here is what it is like to step inside a next generation nuclear-powered attack submarine.


The CIC consists features 10 multifunction consoles, plus a central seat for the commanding officer and a large tactile table which can be used for cooperative mission planning, navigation, show footage from the optronic masts…


While all consoles are multifunction and the same (except two which feature joysticks to steer the various masts), the CIC aboard Suffren is organized in the following way: 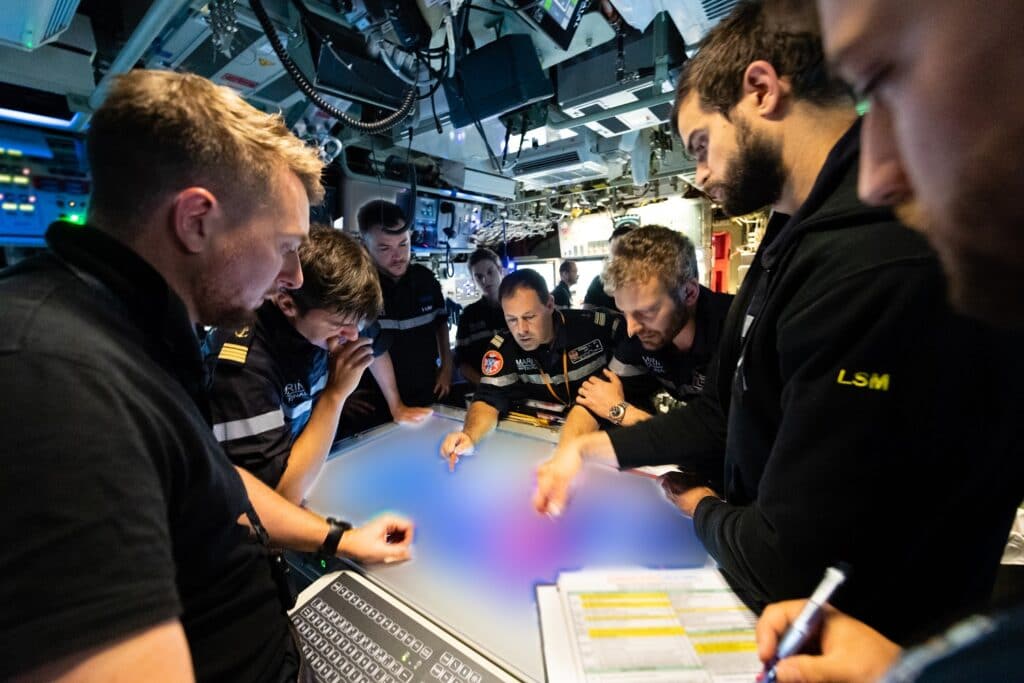 In the CIC, around the chart table, the CO, the XO and acoustic analysts plan the continuation of the transit according to the tactical situation of the submarine. French Navy picture.


Virtually all the equipment in the CIC is of French origin. I did spot however a “Falcon II” radio by Harris. I enquired about it and the Commanding Officer explained that this radio is needed in specific situations involving NATO or US units because of specific encryption.
Commander Richebé explained that in combat operations, there can be up to 15 sailors in the CIC. Forward of the consoles but in the same “room” are two positions which combine damage control, platform management and “driving of the boat”. We were told that the Suffren is very easy to drive. It is done via two joysticks. One of the helmsman of the submarine is just 19 year old.

We then went into the officer’s mess. It was roomy, modern and very comfortable. We spotted some wifi routers in there and the CO confirmed: There is a private/closed wifi aboard which allows the crew to access key data from wherever aboard the boat. The wifi network also is a security feature allowing to located 24/7 the location of each crew member (via an RFID chip in the sailors uniform). We were then shown a berthing compartment: 6 berth per compartment. There too it “appeared” to be comfortable: Each bunk gets its own light, power outlet and USB port. The USB port gives the sailor access to an entertainment platform where they can watch movies on their free time. Naval Group used a contractor experienced in cruise ship furnishing to design the interior of some of the living quarters such as the messes and berthing compartments in order to increase crew comfort.
Commander Antoine Richebé then took us down one deck (there is a total of 3 decks aboard), and we entered the torpedo room. The torpedo handling system is as follows: 5 rows on two levels on the left and 5 rows on two level on the right (we were standing in between each). While we were aboard there were:

The missiles (both anti-ship and naval cruise missiles) were wrapped in some kind of fabric sleeves. We were told that these were thermal protection necessary because of the fuel of the missiles. Suffren can carry a total of 20 weapon in the torpedo handling system. Commander Richebé added that the maximum load out is 24 if the submarines sails out with pre-loaded torpedo tubes. He confirmed to be that even in this situation, weapons can still be swapped around. “It becomes like a Tetris game and is a bit cramped but it is do-able”.

We were then showed the large fridge (large enough to store 70 days worth of food for the entire crew) and we climbed our way back up to the lock-out chamber compartment. Up to 5 fully equipped “Commando Hubert” operators (the combat divers unit of the French Naval Special Forces) can fit in the chamber. The device can also serve as the aft emergency escape hatch.
Нажмите для раскрытия... 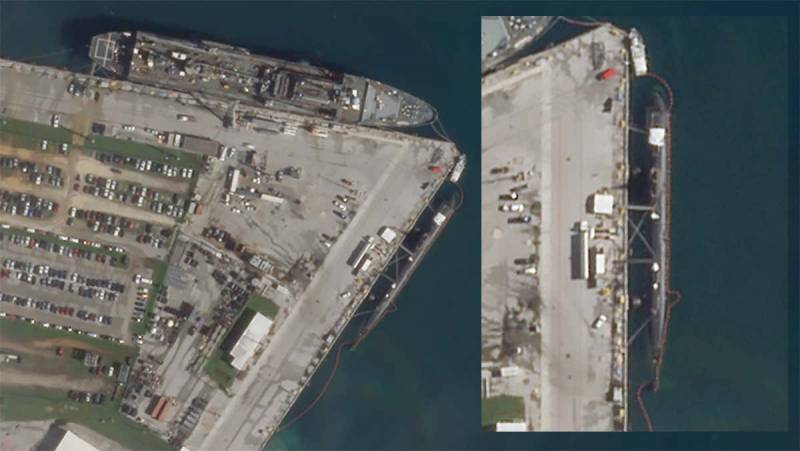 The Hakugei is the second Taigei-class submarine. This is a 3,000-ton, diesel-electric attack submarine measuring 84 meters (275 feet) long, and was previously known as the 29SS class, named after the 29th year of Emperor Akihito’s reign in Japan.юю

Like the last two boats of the preceding Soryu-class and the Taigei, the Hakugei will be equipped with lithium-ion batteries as a power source. Japan has conducted extensive research into the use of lithium-ion batteries on submarines since the early 2000s, and says they require less maintenance and are capable of longer endurance at high speeds while submerged compared to lead-acid batteries.

It is currently the only known country to have operational submarines using lithium-ion batteries.

The upsized submarine force will comprise eight older Oyashio-class submarines, twelve Soryus and the two Taigei-class boats. Japan has already laid down one more Taigei-class submarine and has funding approved for two more, the latest being $602.3 million allocated for one more boat in the defense ministry’s latest budget.
Нажмите для раскрытия... 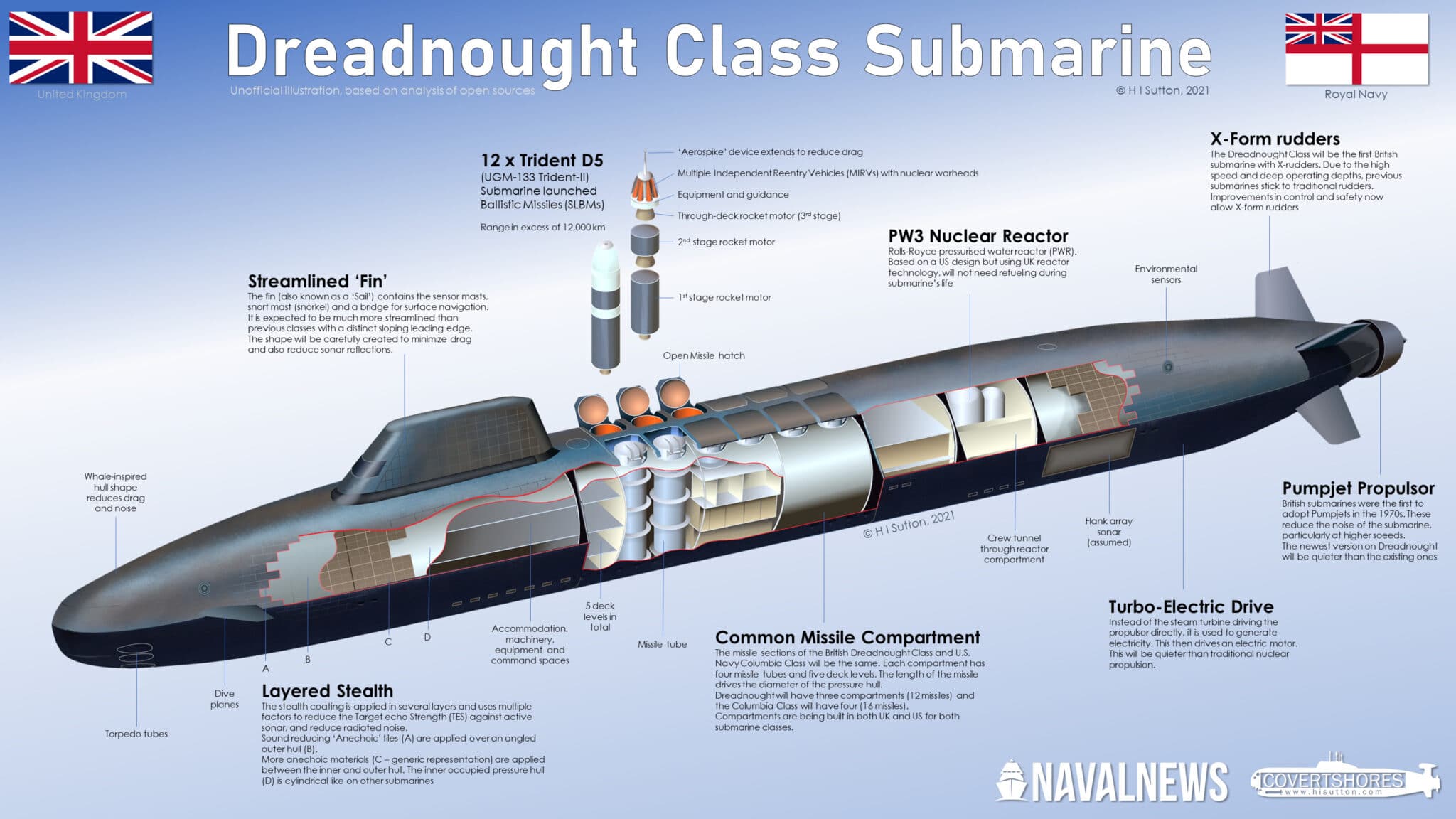 The Royal Navy’s new Dreadnought Class submarine promises to be the stealthiest yet. The first two boats, HMS Dreadnought and HMS Valiant, are already under construction. They are destined to take over Britain’s nuclear deterrent from the 2030s. They incorporate significant changes in the design... 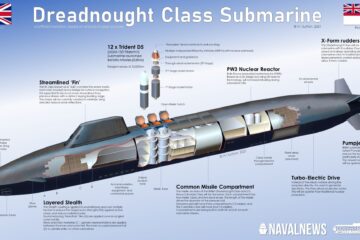 News
First Submarine To Use New Stealth Technology
03 Nov 2021
The adage that stealth is a submarine’s main defense is true today and tomorrow. Speed, ... 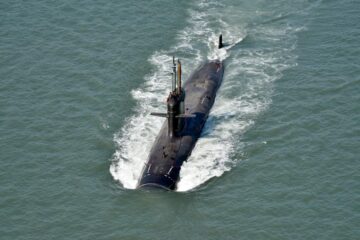