In contrast to the melting of the Arctic sea ice, sea ice around Antarctica has been expanding as of 2013.[4] Satellite measurements by NASA indicate a still increasing sheet thickness above the continent, outweighing the losses at the edge.[5] The reasons for this are not fully understood...
https://en.m.wikipedia.org/wiki/Antarctic_ice_sheet
Нажмите для раскрытия...

Recent observationsEdit
A group of scientists with the University of California updated previous results ranging from 1979 to 2017, which improved time series for more accurate results. Their article, published January 2019, covered four decades of information in Antarctica, revealing the total mass loss which increased gradually per decade.

This improved study revealed an acceleration of near 280% over the span of four decades. The study questions previous hypotheses, such as the belief that the heavy melt began in the 1940s to 1970s, suggesting that more recent anthropogenic actions have caused accelerated melt.[27]
Нажмите для раскрытия...

In 2015 a study was published by NASA, the lead author was Jay Zwally, a glaciologist with NASA Goddard Space Flight Center. The study showed evidence that Antarctica had experienced a net gain of 112 billion tons of ice annually between 1992 and 2001 and a gain of 82 billion tons annually between 2003 and 2008. This information was not at all in line with previous findings on the subject which insisted that Antarctica has been losing ice mass because of global warming.
These new findings were based on data that came from studying changes in the surface height of the Antarctic ice sheet using radar altimeters. The data was collected using two European Space Agency European Remote Sensing satellites and NASA’s Ice, Cloud, and land Elevation Satellite.

Basically, the study shows that gains in snowfall in East Antarctica are more than enough to offset the losses from melting glaciers on the West side of the continent. These gains were not just in recent years but had been the result of increased snowfall over the past 10,000 years or since the last ice age. The study goes on to say that sea levels cannot be rising because of glaciers melting in Antarctica because its actually gaining ice.
Seems simple enough right? If the southern ice cap isn’t losing ice but is instead gaining mass then maybe this global warming thing isn’t so bad. Well, sadly that is just not the case. The study would turn out to not be accurate.

Since 2015 scientists have had a chance to look over the data and have had time to do a few follow-up studies and the results are clear.

It is agreed among scientists studying the situation that the Eastern area is gaining a lot of ice due to thousands of years of continued snowfall. However, measuring the size of that gain can be difficult at best. The major issues with Zwally’s study are that it used altimeter data from satellites, which is subject to systematic errors such as snowpack penetration and telling the difference between snow that is on the ground and snow that is still falling. Also, in order to calibrate their measurements, Zwally’s team bounced lasers of the Southern Ocean which may not have been reliable.

The graph below is from information in another study done in 2018 and it shows the change in the rates of ice sheet loss over the years. You can see that the line for East Antarctica did show a positive rate of change for much of the past few decades. However, it was not enough to offset the losses in West Antarctica and the Antarctic Peninsula. We can clearly see that when these numbers are put together the continent is losing a lot of ice every year. Furthermore, the rate of loss is getting worse as time goes by. 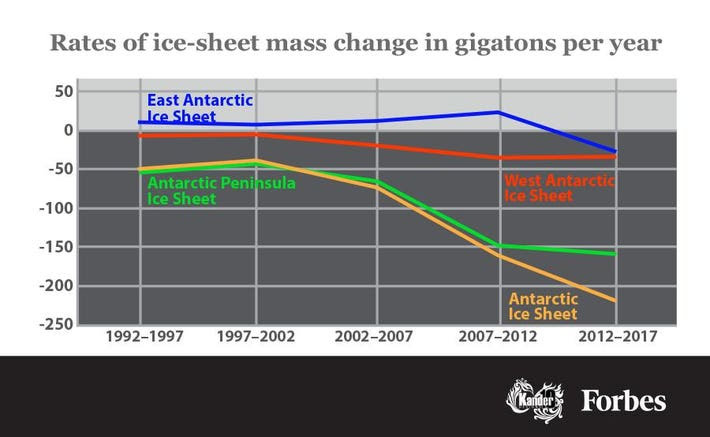 Even with this information further study is still needed. In order to fit that need on September 15, 2018, NASA launched the Ice, Cloud and land Elevation Satellite-2, or ICESat-2. This satellite will use the Advanced Topographic Laser Altimeter System, or ATLAS to measure the height of the ice sheets in Antarctica and Greenland. It will accomplish this by firing 10,000 laser pulses per second toward the surface of the Earth and timing how long it takes for the pulses to get back to the satellite. This will collect a large amount of altimeter data that is accurate enough to estimate height changes within 4 millimeters.

When we look at all the available data the big picture becomes clear. Antarctica is losing far more ice than it’s gaining and the rates of loss are increasing as time goes on. In short, climate change is real and always has been.
But the truth is that Zwally’s findings never contradicted climate change. The International Panel on Climate Change (IPCC) stated in its report that a certain amount of sea level rise was due to the ice melting from Antarctica. Zwally’s finding didn’t dispute rising sea levels it just pointed out that the source may not be Antarctica.

“When our paper came out, I was very careful to emphasize that this is in no way contradictory to the findings of the IPCC report or conclusions that climate change is a serious problem that we need to do something about,”

In another article, he said “I know some of the climate deniers will jump on this, and say this means we don’t have to worry as much as some people have been making out,” he said. “It should not take away from the concern about climate warming.”
Нажмите для раскрытия...